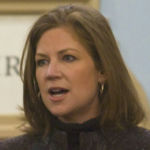 Why Is Jan Crawford Influential?

According to Wikipedia, Jan Crawford, also known as Jan Crawford Greenburg, is a television journalist, author, and attorney. She serves as a political correspondent and chief legal correspondent for CBS News and previously for ABC News. She appears regularly on the CBS Evening News, Face the Nation, CBS This Morning, and CBS News Sunday Morning. She led CBS News's coverage of the 2012 Presidential Elections. She is a New York Times bestselling author of Supreme Conflict: The Inside Story of the Struggle for Control of the United States Supreme Court and also a member of the New York State Bar Association.

Other Resources About Jan Crawford

What Schools Are Affiliated With Jan Crawford?

Jan Crawford is affiliated with the following schools: