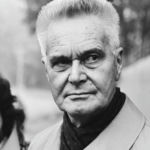 Why Is Jan Tinbergen Influential?

According to Wikipedia, Jan Tinbergen was a Dutch economist who was awarded the first Nobel Memorial Prize in Economic Sciences in 1969, which he shared with Ragnar Frisch for having developed and applied dynamic models for the analysis of economic processes. He is widely considered to be one of the most influential economists of the 20th century and one of the founding fathers of econometrics.

Other Resources About Jan Tinbergen

What Schools Are Affiliated With Jan Tinbergen?

Jan Tinbergen is affiliated with the following schools: