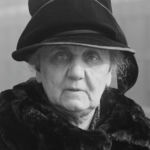 Why Is Jane Addams Influential?

According to Wikipedia, Laura Jane Addams was an American settlement activist, reformer, social worker, sociologist, public administrator and author. She was an important leader in the history of social work and women's suffrage in the United States and advocated for world peace. She co-founded Chicago's Hull House, one of America's most famous settlement houses. In 1910, Addams was awarded an honorary master of arts degree from Yale University, becoming the first woman to receive an honorary degree from the school. In 1920, she was a co-founder of the American Civil Liberties Union .

Other Resources About Jane Addams

What Schools Are Affiliated With Jane Addams?

Jane Addams is affiliated with the following schools:

What Are Jane Addams's Academic Contributions?

Jane Addams has made the following academic contributions: