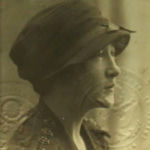 American journalist; charged with being a Nazi propagandist but never convicted

Why Is Jane Anderson Influential?

According to Wikipedia, Jane Anderson was an American war reporter journalist who broadcast Nazi propaganda in Germany during World War II. She was indicted on charges of treason in 1943, but charges were dropped after the war for lack of evidence.

Other Resources About Jane Anderson

What Schools Are Affiliated With Jane Anderson ?

Jane Anderson is affiliated with the following schools: