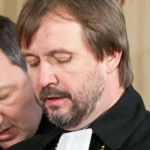 Why Is Jānis Vanags Influential?

According to Wikipedia, Jānis Vanags is a Latvian Lutheran Archbishop. Since 1993 he has been the Archbishop of Riga in the Evangelical Lutheran Church of Latvia. Vanags is seen as conservative on theological or moral issues and opposes women's ordination. He also opposes abortion and euthanasia, and encourages homosexual people to be chaste. He presided over the agreement of fellowship with the Lutheran Church–Missouri Synod of the United States.

Other Resources About Jānis Vanags

What Schools Are Affiliated With Jānis Vanags?

Jānis Vanags is affiliated with the following schools: