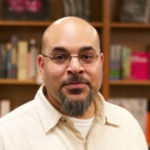 Why Is Jared Ball Influential?

According to Wikipedia, Jared A. Ball is a professor of communication studies at Morgan State University in Baltimore, Maryland, United States. Additionally, he is an author, radio host and mixtape radio producer. In the 2008 presidential election, Ball sought the nomination of the Green Party of the United States before eventually dropping out and endorsing Congresswoman Cynthia McKinney.

Other Resources About Jared Ball

What Schools Are Affiliated With Jared Ball?

Jared Ball is affiliated with the following schools: