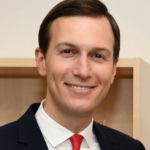 Why Is Jared Kushner Influential?

According to Wikipedia, Jared Corey Kushner is an American businessman and investor. He served as a senior advisor to his father-in-law, Donald Trump, the 45th president of the United States. Kushner is the son of the former real-estate developer Charles Kushner and is married to businesswoman Ivanka Trump, former President Trump's daughter and fellow advisor. As a result of his father's conviction and incarceration for fraud, he took over management of his father's real estate company Kushner Companies, which launched his business career. He later also bought Observer Media, publisher of the New York Observer. He is the co-founder and part owner of Cadre, an online real-estate investment platform.

Other Resources About Jared Kushner

What Schools Are Affiliated With Jared Kushner?

Jared Kushner is affiliated with the following schools: