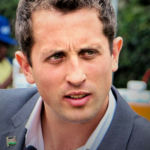 Why Is Jason Dunford Influential?

According to Wikipedia, Jason Edward Dunford, OGW, OLY , also known as Samaki Mkuu, is a Kenyan Olympic swimmer, media personality, rapper and entrepreneur. During his swimming career he was predominantly a butterfly and freestyle sprinter winning gold medals at the Commonwealth Games, Universiade, All-Africa Games and African Championships, and reaching finals at the Olympics, World Championships and Short Course World Championships. He also held African, Universiade and Olympic records. He has worked as a broadcast journalist for the BBC, is a co-founder and adviser to software company, Safi and currently serves as the CEO of Baila Entertainment whilst performing as Samaki Mkuu, one half of the rap duo Romantico & Samaki Mkuu.

Other Resources About Jason Dunford

What Schools Are Affiliated With Jason Dunford?

Jason Dunford is affiliated with the following schools: