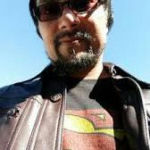 Why Is Jason Tanamor Influential?

According to Wikipedia, Jason Tanamor is a Filipino-American author, writer, and entertainment interviewer. He is a former contracting officer at Bonneville Power Administration, within the United States Department of Energy, as well as a former contract specialist for the United States Department of Defense. His novels range in genre, from dark in nature to satirical and from young adult to children's.

Other Resources About Jason Tanamor

What Schools Are Affiliated With Jason Tanamor?

Jason Tanamor is affiliated with the following schools: