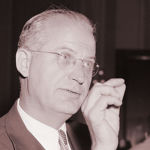 Why Is J. B. Matthews Influential?

According to Wikipedia, Joseph Brown "Doc" Matthews Sr. , best known as J. B. Matthews, was an American linguist, educator, writer, and political activist. A committed pacifist, he became a self-described "fellow traveler" of the Communist Party USA in the mid-1930s, achieving national prominence as a leader of a number of the party's so-called "mass organizations". Disillusionment with communism led to anti-communist testimony before the Dies Committee in 1938. He then served as chief investigator for the House Committee on Un-American Activities, headed by Martin Dies Jr., consultant on Communist affairs for the Hearst Corporation, and by June 1953 research director for Joseph McCarthy's Permanent Subcommittee on Investigations of the United States Senate. When Matthews published claims that the Protestant clergy comprised a base of support of the American Communist movement, he was forced to resign.

Other Resources About J. B. Matthews

What Schools Are Affiliated With J. B. Matthews?

J. B. Matthews is affiliated with the following schools: