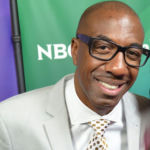 Why Is J. B. Smoove Influential?

According to Wikipedia, Jerry Angelo Brooks , known as J. B. Smoove, is an American actor, comedian and writer. After beginning his career in 1995 on Def Comedy Jam, he was a writer and performer on NBC's Saturday Night Live , and is best known for his starring roles on HBO's Curb Your Enthusiasm and the CBS sitcom The Millers . He also portrayed a fictionalized version of himself on the BET improv-comedy reality television parody Real Husbands of Hollywood .

Other Resources About J. B. Smoove

What Schools Are Affiliated With J. B. Smoove?

J. B. Smoove is affiliated with the following schools: