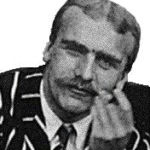 Why Is J. B. S. Haldane Influential?

According to Wikipedia, John Burdon Sanderson Haldane , nicknamed "Jack" or "JBS", was a British scientist known for his works in physiology, genetics, evolutionary biology, and mathematics. With innovative use of statistics in biology, he was one of the founders of neo-Darwinism. He served in the Great War, and obtained the rank of captain. Despite his lack of an academic degree in the field, he taught biology at the University of Cambridge, the Royal Institution, and University College London. Renouncing his British citizenship, he became an Indian citizen and worked at the Indian Statistical Institute for the rest of his life.

Other Resources About J. B. S. Haldane

What Schools Are Affiliated With J. B. S. Haldane?

J. B. S. Haldane is affiliated with the following schools:

What Are J. B. S. Haldane's Academic Contributions?

J. B. S. Haldane has made the following academic contributions: