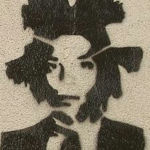 Why Is Jean-Michel Basquiat Influential?

According to Wikipedia, Jean-Michel Basquiat was an American artist who rose to success during the 1980s as part of the Neo-expressionism movement. Basquiat first achieved fame as part of the graffiti duo SAMO, alongside Al Diaz, writing enigmatic epigrams in the cultural hotbed of Manhattan's Lower East Side during the late 1970s, where rap, punk, and street art coalesced into early hip-hop music culture. By the early 1980s, his paintings were being exhibited in galleries and museums internationally. At 21, Basquiat became the youngest artist to ever take part in documenta in Kassel. At 22, he was one of the youngest to exhibit at the Whitney Biennial in New York. The Whitney Museum of American Art held a retrospective of his artwork in 1992.

Other Resources About Jean-Michel Basquiat