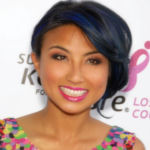 Why Is Jeannie Mai Influential?

According to Wikipedia, Jeannie Mai-Jenkins is an American television host and stylist best known for her work on the makeover show How Do I Look? and the syndicated daytime talk show The Real. As a fashion expert, she is frequently featured on television programs such as Today, Extra TV, Entertainment Tonight, and Insider. She has also appeared as a host for E! as well as a red carpet host for the American Music Awards and as a correspondent for the Miss Universe pageant. She is currently a sideline reporter on Holey Moley on ABC.

Other Resources About Jeannie Mai

What Schools Are Affiliated With Jeannie Mai?

Jeannie Mai is affiliated with the following schools: