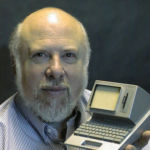 Why Is Jef Raskin Influential?

According to Wikipedia, Jef Raskin was an American human–computer interface expert best known for conceiving and starting the Macintosh project at Apple in the late 1970s. Early life and education Jef Raskin was born in New York City to a secular Jewish family, whose surname is a matronymic from "Raske", Yiddish nickname for Rachel. He received a BA in mathematics and a BS in physics with minors in philosophy and music from Stony Brook University. In 1967, he received a master's degree in computer science from Pennsylvania State University, after having switched from mathematical logic due to differences of opinion with his advisor. Even though he had completed work for his PhD, the university was not accredited for a PhD in computer science. The first original computer application he wrote was a music application as part of his master's thesis.

Other Resources About Jef Raskin

What Schools Are Affiliated With Jef Raskin?

Jef Raskin is affiliated with the following schools:

What Are Jef Raskin's Academic Contributions?

Jef Raskin has made the following academic contributions: