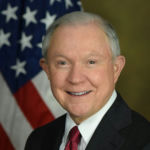 Why Is Jeff Sessions Influential?

According to Wikipedia, Jefferson Beauregard Sessions III is an American politician and attorney who served as the 84th United States Attorney General from 2017 to 2018. A member of the Republican Party, he previously served as United States Senator from Alabama from 1997 to 2017 before resigning that position to serve as Attorney General in the administration of President Donald Trump.

Other Resources About Jeff Sessions

What Schools Are Affiliated With Jeff Sessions?

Jeff Sessions is affiliated with the following schools: