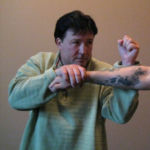 Why Is Jeff Speakman Influential?

According to Wikipedia, Jeff Speakman is an American actor and a martial artist in the art of American Kenpo and Japanese Gōjū-ryū, earning black belts in each. Between 2008 and 2018, he was President of the International Kempo Federation.

Other Resources About Jeff Speakman

What Schools Are Affiliated With Jeff Speakman?

Jeff Speakman is affiliated with the following schools: