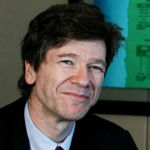 Why Is Jeffrey Sachs Influential?

Jeffrey Sachs is the Quetelet Professor of Sustainable Development at Columbia’s School of International and Public Affairs and professor of health policy and management for Columbia University’s School of Public Health. He completed his studies at Harvard University, earning a B.A., an M.A., and a Ph.D in economics.

Throughout his career, Sachs has studied economic geography, macroeconomics (for which he wrote a textbook), extractive industries, public health, and economic growth. His expertise has led him to work as an economic advisor for governments seeking to move from communism to capitalism, such as Bolivia and Poland.

In 2005, Sachs published a book called, The End of Poverty, in which he examines the economic and political conditions in Africa. His research suggests that with proper management and funding, we can eradicate the most extreme poverty facing people in Africa and other areas of the world. He has worked with the Islamic Development Bank and the Millennium Villages Project to attempt to address some of the needs in African countries.

Sachs’ high-profile work is not without controversy or detractors. Some have suggested that his work in Africa has made things worse, and that his approaches to helping poor nations have fostered dependence in unforeseen ways.

According to Wikipedia, Jeffrey David Sachs is an American economist, academic, public policy analyst and former director of The Earth Institute at Columbia University, where he holds the title of University Professor. He is known as an expert on sustainable development, economic development, and the fight against poverty.

Other Resources About Jeffrey Sachs

What Schools Are Affiliated With Jeffrey Sachs?

Jeffrey Sachs is affiliated with the following schools:

What Are Jeffrey Sachs's Academic Contributions?

Jeffrey Sachs has made the following academic contributions: