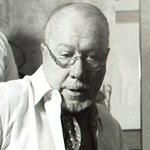 Australian artist known for his modernist depictions of urban landscapes

Why Is Jeffrey Smart Influential?

According to Wikipedia, Frank Jeffrey Edson Smart was an expatriate Australian painter known for his precisionist depictions of urban landscapes that are "full of private jokes and playful allusions". Smart was born and educated in Adelaide where he worked as an Art teacher. After departing for Europe in 1948 he studied in Paris at La Grande Chaumière, and later at the Académie Montmartre under Fernand Léger. He returned to Australia 1951, living in Sydney, and began exhibiting frequently in 1957. In 1963, he moved to Italy. After a successful exhibition in London, he bought a rural property called "Posticcia Nuova" near Arezzo in Tuscany. He resided there with his partner until his death.

Other Resources About Jeffrey Smart

What Schools Are Affiliated With Jeffrey Smart?

Jeffrey Smart is affiliated with the following schools: