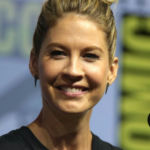 Why Is Jenna Elfman Influential?

According to Wikipedia, Jennifer Mary Elfman is an American actress. She is best known for her leading role as Dharma on the ABC sitcom Dharma & Greg , for which she received the Golden Globe Award for Best Actress – Television Series Musical or Comedy in 1999, and three nominations for the Primetime Emmy Award for Outstanding Lead Actress in a Comedy Series. After making her film debut in Grosse Pointe Blank , she has appeared in Krippendorf's Tribe , Dr. Dolittle , EDtv , Keeping the Faith , Town & Country , Looney Tunes: Back in Action , Clifford's Really Big Movie , and Big Stone Gap .

Other Resources About Jenna Elfman

What Schools Are Affiliated With Jenna Elfman?

Jenna Elfman is affiliated with the following schools: