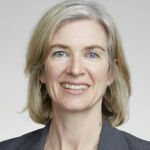 Why Is Jennifer Doudna Influential?

Areas of Specialization: Biochemistry, Molecular Biology
Jennifer Doudna is a Li Ka Shing Chancellor Chair Professor for the Department of Chemistry and Department of Molecular and Cell Biology at the University of California, Berkeley. In addition, she has been a professor at the University of California, San Francisco and an investigator with the Howard Hughes Medical Institute and senior investigator at the Gladstone Institutes. She earned a B.A. in biochemistry from Pomona College and a Ph.D. in biological chemistry and molecular pharmacology from Harvard Medical School.

She is best known for her work with CRISPR. She, along with her colleague Emmanuelle Charpentier, were the first to suggest that genes could be edited or reprogrammed, now considered one of the most impactful discoveries ever made in the field of biology.

For her work in gene editing, she has received numerous prestigious awards, including the Breakthrough Prize in Life Sciences, the Gruber Prize in Genetics, the Kavli Prize in Nanoscience and in 2016, she was runner-up for the Time magazine Person of the Year, alongside her fellow CRISPR colleagues.

According to Wikipedia, Jennifer Anne Doudna is an American biochemist who has done pioneering work in CRISPR gene editing, and made other fundamental contributions in biochemistry and genetics. She received the 2020 Nobel Prize in Chemistry, with Emmanuelle Charpentier, "for the development of a method for genome editing." She is the Li Ka Shing Chancellor's Chair Professor in the Department of Chemistry and the Department of Molecular and Cell Biology at the University of California, Berkeley. She has been an investigator with the Howard Hughes Medical Institute since 1997.

Other Resources About Jennifer Doudna

What Schools Are Affiliated With Jennifer Doudna?

Jennifer Doudna is affiliated with the following schools: