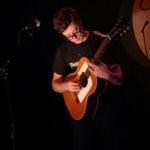 Why Is Jeremy Messersmith Influential?

According to Wikipedia, Jeremy Messersmith is an American indie pop musician, based in Minneapolis, Minnesota, United States.Biography Jeremy Messersmith was born in Charleston, South Carolina, United States, and grew up in the Tri-Cities area of Washington. He began playing music in church at a young age, and counts Sandi Patti, Carman, DC Talk and Michael W. Smith amongst his earliest musical influences. He initially played the trumpet, but was forced to stop after having dental braces installed; he then switched to guitar. In 1999, he moved to Minneapolis to study music at North Central University.

Other Resources About Jeremy Messersmith

What Schools Are Affiliated With Jeremy Messersmith?

Jeremy Messersmith is affiliated with the following schools: