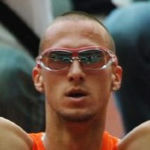 Why Is Jeremy Wariner Influential?

According to Wikipedia, Jeremy Matthew Wariner is a retired American track athlete specializing in the 400 meters. He has won four Olympic medals and six World Championships medals. He is the fourth fastest competitor in the history of the 400 m event with a personal best of 43.45 seconds, behind Wayde van Niekerk , Michael Johnson and Butch Reynolds and the fifth fastest all-time mark when set it in 2007.

Other Resources About Jeremy Wariner

What Schools Are Affiliated With Jeremy Wariner?

Jeremy Wariner is affiliated with the following schools: