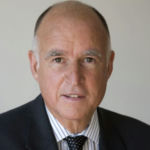 34th and 39th Governor of California

Why Is Jerry Brown Influential?

According to Wikipedia, Edmund Gerald Brown Jr. is an American lawyer, author, and politician who served as the 34th and 39th governor of California from 1975 to 1983 and 2011 to 2019. A member of the Democratic Party, he was elected Secretary of State of California in 1970; Brown later served as Mayor of Oakland from 1999 to 2007 and Attorney General of California from 2007 to 2011. He was both the oldest and sixth-youngest governor of California due to the 28-year gap between his second and third terms. Upon completing his fourth term in office, Brown became the fourth longest-serving governor in U.S. history, serving 16 years and 5 days in office.

Other Resources About Jerry Brown

What Schools Are Affiliated With Jerry Brown?

Jerry Brown is affiliated with the following schools: