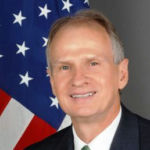 Why Is Jerry P. Lanier Influential?

According to Wikipedia, Jerry P. Lanier is a former acting U.S. Ambassador to Sudan. He was in this position from May 13, 2014 to February 26, 2016. He was the Acting Coordinator for Counterterrorism in the Bureau of Counterterrorism, at the Department of State from December 2012 to February 2014. He is a former Ambassador from the United States of America to the Republic of Uganda.

Other Resources About Jerry P. Lanier

What Schools Are Affiliated With Jerry P. Lanier?

Jerry P. Lanier is affiliated with the following schools: