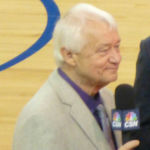 Why Is Jerry Reynolds Influential?

According to Wikipedia, Jerry Owen Reynolds is an American former professional basketball coach and current executive in the NBA. He coached the Sacramento Kings for two different stretches; once in 1987 and from 1988 through 1989. He also served as the team's general manager. Jerry Reynolds served as general manager of the Sacramento Monarchs WNBA team, a post from which he retired in 2003.

Other Resources About Jerry Reynolds

What Schools Are Affiliated With Jerry Reynolds ?

Jerry Reynolds is affiliated with the following schools: