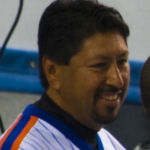 Why Is Jesse Orosco Influential?

According to Wikipedia, Jesse Russell Orosco is a Mexican American former relief pitcher in Major League Baseball who holds the major league record for career pitching appearances, having pitched in 1,252 games. He pitched most notably for the New York Mets in the 1980s and made the NL All-Star team in 1983 and 1984. He won a World Series in 1986 with the Mets and in 1988 with the Dodgers. He threw left-handed, but batted right-handed. He retired in 2003 after having been with the Mets, Dodgers, Cleveland Indians, Milwaukee Brewers, Baltimore Orioles, St. Louis Cardinals, San Diego Padres, New York Yankees, and Minnesota Twins. He retired when he was 46 years old, one of the oldest players to still be playing in the modern age. Orosco is one of only 29 players in baseball history to date to have appeared in Major League games in four decades.

Other Resources About Jesse Orosco

What Schools Are Affiliated With Jesse Orosco?

Jesse Orosco is affiliated with the following schools: