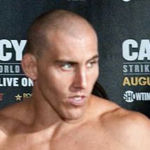 Why Is Jesse Taylor Influential?

According to Wikipedia, Jesse Marcus Taylor is an American professional mixed martial arts and 10th Planet Brazilian Jiu Jitsu black belt fighter currently competing in the Welterweight division. A professional competitor since 2006, he was a cast member of SpikeTV's The Ultimate Fighter 7, winning his entry, preliminary, quarterfinal and semi-final matches, and then became infamous for being the only fighter to ever be removed from finals due to events that occurred after filming was completed. Taylor later won The Ultimate Fighter: Redemption Welterweight Tournament, and has also fought for top promotions such as Strikeforce, DREAM, MFC, AFC, Impact FC, Shark Fights, Cage Warriors and Absolute Championship Berkut.

Other Resources About Jesse Taylor

What Schools Are Affiliated With Jesse Taylor?

Jesse Taylor is affiliated with the following schools: