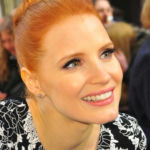 Why Is Jessica Chastain Influential?

According to Wikipedia, Jessica Michelle Chastain is an American actress and film producer. Known for her roles in films with feminist themes, she has received various accolades, including a Golden Globe Award and two Screen Actors Guild Awards, in addition to nominations for three Academy Awards and two British Academy Film Awards. Time magazine named her one of the 100 most influential people in the world in 2012.

Other Resources About Jessica Chastain

What Schools Are Affiliated With Jessica Chastain?

Jessica Chastain is affiliated with the following schools: