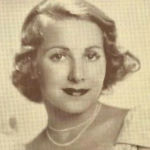 Why Is Jessica Dragonette Influential?

According to Wikipedia, Jessica Valentina Dragonette was a singer who became popular on American radio and was active in the World War II effort. Early life Born in Calcutta, India, or Philadelphia, Pennsylvania as Jessica Valentina Dragonetti, the youngest of three children of Italian-born parents, Luigi and Rachele Dragonetti, the Social Security Death Index cites Dragonette's year of birth as 1900, as does the 1900 United States census which gives the age of "Jessie Dragonet" as 4 months. By Christmas 1909, she was orphaned and raised in a Catholic convent school, and she graduated from Catholic Girls' High School in Philadelphia in 1919. Dragonette was a 1923 graduate of Mt. St. Mary's College. New York poet Ree Dragonette was her cousin.

Other Resources About Jessica Dragonette

What Schools Are Affiliated With Jessica Dragonette?

Jessica Dragonette is affiliated with the following schools: