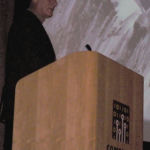 Why Is Jim Whittaker Influential?

According to Wikipedia, James W. Whittaker , also known as Jim Whittaker, is an American mountaineer and mountain guide. Born and raised in Seattle, Washington, on May 1, 1963 he became the first American to reach the summit of Mount Everest as a member of the American Mount Everest Expedition led by Norman Dyhrenfurth, alongside the Sherpa Nawang Gombu . They ran out of oxygen, but managed to reach the summit.

Other Resources About Jim Whittaker

What Schools Are Affiliated With Jim Whittaker?

Jim Whittaker is affiliated with the following schools: