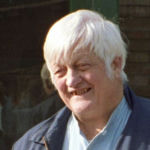 Why Is Joan Hinton Influential?

According to Wikipedia, Joan Hinton was a nuclear physicist and one of the few women scientists who worked for the Manhattan Project in Los Alamos. She lived in the People's Republic of China after 1949, where she and her husband Erwin Engst participated in China's efforts at developing a socialist economy, working extensively in agriculture. She lived on a dairy farm north of Beijing before her death on June 8, 2010.

Other Resources About Joan Hinton

What Schools Are Affiliated With Joan Hinton?

Joan Hinton is affiliated with the following schools: