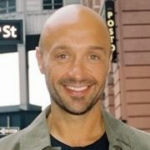 Why Is Joe Bastianich Influential?

According to Wikipedia, Joseph Bastianich is an Italian-American restaurateur, winemaker, author, television personality, and musician. He, along with his mother and business partner Lidia Bastianich, co-owns thirty restaurants in four countries, including Carnevino in Las Vegas; Osteria Mozza in Singapore; and the Pizzeria Mozza in Los Angeles, which the owners expanded in 2010. Earlier that same year, they teamed up with businessman Oscar Farinetti to bring Eataly, an upscale food and wine market, to Boston, Chicago, Las Vegas, Los Angeles, New York City and London.

Other Resources About Joe Bastianich

What Schools Are Affiliated With Joe Bastianich?

Joe Bastianich is affiliated with the following schools: