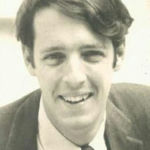 Why Is Joe McGinniss Influential?

According to Wikipedia, Joseph Ralph McGinniss Sr. was an American non-fiction writer and novelist. The author of twelve books, he first came to prominence with the best-selling The Selling of the President 1968 which described the marketing of then-presidential candidate Richard Nixon. He is popularly known for his trilogy of bestselling true crime books—Fatal Vision, Blind Faith and Cruel Doubt—which were adapted into TV miniseries in the 1980s and 90s. His last book was The Rogue: Searching for the Real Sarah Palin, an account of Sarah Palin, the former governor of Alaska who was the 2008 Republican vice-presidential nominee.

Other Resources About Joe McGinniss

What Schools Are Affiliated With Joe McGinniss?

Joe McGinniss is affiliated with the following schools:

What Are Joe McGinniss's Academic Contributions?

Joe McGinniss has made the following academic contributions: