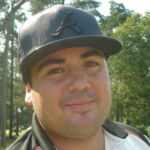 Why Is Joel Sjöholm Influential?

According to Wikipedia, Joel Sjöholm is a Swedish professional golfer, who plays on the European Tour. In 2017 he won the Italian Challenge Open, his first win on the Challenge Tour. Early life He was born in Chile and was adopted by a Swedish family when three months old. He started playing the game at young age at Skaftö Golf Club in Fiskebäckskil, on the small Swedish west coast island Skaftö with 1,400 inhabitants. Other famous members, spending a lot of time there, during the summer seasons, were future Ryder Cup captain Thomas Bjørn, five-time European Tour winner Barry Lane and, a few years later, the Kinhult siblings; future European Tour winner Marcus and world amateur number one Frida.

Other Resources About Joel Sjöholm

What Schools Are Affiliated With Joel Sjöholm?

Joel Sjöholm is affiliated with the following schools: