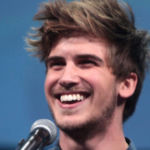 Why Is Joey Graceffa Influential?

According to Wikipedia, Joseph Michael Graceffa Jr. is an American YouTuber, vlogger, actor, author, and producer. He runs four active YouTube channels, all named after him. His main channel is dedicated to vlogging, while the second features video gaming content. The third is for daily vlogs, and the fourth is a react channel. His channels have a combined total of more than 2.9 billion views. He was a contestant on the 22nd and 24th seasons of The Amazing Race, and has appeared in a handful of short films as well as creating and hosting Escape the Night, an unscripted, unrehearsed web series, distributed by YouTube via its paid-subscription service YouTube Premium. He appears in all four of the seasons with several other YouTubers, including Liza Koshy, Shane Dawson, Colleen Ballinger, and Rosanna Pansino.

Other Resources About Joey Graceffa

What Schools Are Affiliated With Joey Graceffa?

Joey Graceffa is affiliated with the following schools:

What Are Joey Graceffa's Academic Contributions?

Joey Graceffa has made the following academic contributions: