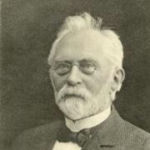 Why Is Eugenius Warming Influential?

According to Wikipedia, Johannes Eugenius Bülow Warming , known as Eugen Warming, was a Danish botanist and a main founding figure of the scientific discipline of ecology. Warming wrote the first textbook on plant ecology, taught the first university course in ecology and gave the concept its meaning and content. Scholar R. J. Goodland wrote in 1975: “If one individual can be singled out to be honoured as the founder of ecology, Warming should gain precedence”.

Other Resources About Eugenius Warming

What Schools Are Affiliated With Eugenius Warming?

Eugenius Warming is affiliated with the following schools: