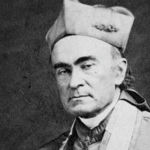 Why Is John Baptist Purcell Influential?

According to Wikipedia, John Baptist Purcell was an American prelate of the Catholic Church. He served as Bishop of Cincinnati from 1833 to his death in 1883, and he was elevated to the rank of archbishop in 1850. He formed the basis of Father Ferrand, the Ohio-based "Irish by birth, French by ancestry" character in the prologue of Willa Cather's historical novel Death Comes for the Archbishop who goes to Rome asking for a bishop for New Mexico Territory.

Other Resources About John Baptist Purcell

What Schools Are Affiliated With John Baptist Purcell?

John Baptist Purcell is affiliated with the following schools: