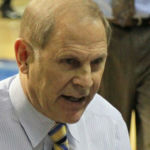 Why Is John Beilein Influential?

According to Wikipedia, John Patrick Beilein is an American professional basketball coach who currently serves as the Senior Player Development Advisor for the Detroit Pistons of the National Basketball Association . Before being hired by Detroit, Beilein served as the head coach of the Cleveland Cavaliers of the National Basketball Association . Prior to joining the Cavaliers, he coached the Michigan Wolverines , West Virginia Mountaineers , Richmond Spiders , Canisius Golden Griffins in NCAA Division I as well as Le Moyne College , Nazareth College and Erie Community College . Beilein has won 754 career games at four-year universities and 829 games altogether, including those at the junior college level. Beilein’s overall career wins counting the time spent in Cleveland is 843 games.

Other Resources About John Beilein

What Schools Are Affiliated With John Beilein?

John Beilein is affiliated with the following schools: