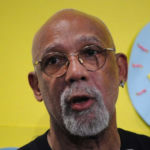 Why Is John Carlos Influential?

According to Wikipedia, John Wesley Carlos is an American former track and field athlete and professional football player. He was the bronze-medal winner in the 200 meters at the 1968 Summer Olympics, where he displayed the Black Power salute on the podium with Tommie Smith. He went on to tie the world record in the 100-yard dash and beat the 200 meters world record . After his track career, he enjoyed a brief stint in the Canadian Football League but retired due to injury.

Other Resources About John Carlos

What Schools Are Affiliated With John Carlos?

John Carlos is affiliated with the following schools: