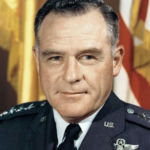 Why Is John D. Lavelle Influential?

According to Wikipedia, John Daniel Lavelle was a United States Air Force general and commander of Seventh Air Force, with headquarters at Tan Son Nhut Air Base, Republic of Vietnam. Lavelle was removed from his position in 1972 and forced to retire due to alleged misconduct over bombing missions during the Vietnam War while serving as the Seventh Air Force commander. Since the ranks of general and lieutenant general are temporary ranks and linked to their corresponding position of assignment, federal law at the time, required senatorial approval for an officer to retire at these higher ranks. Due to these allegations the Senate refused to confirm Lavelle's retirement as a four-star or three-star general. Lavelle was reverted and retired at his permanent two-star rank of major general.

Other Resources About John D. Lavelle

What Schools Are Affiliated With John D. Lavelle?

John D. Lavelle is affiliated with the following schools: