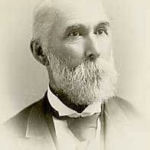 Why Is John Daniel Clardy Influential?

According to Wikipedia, John Daniel Clardy was a U.S. Representative from Kentucky. Early life John Clardy was born in Smith County, Tennessee on August 30, 1828. He was one of six sons and two daughters born to John C. and Elizabeth Clardy. Three of Clardy's brothers served in the Confederate States Army during the Civil War; two of them were killed in action.

Other Resources About John Daniel Clardy

What Schools Are Affiliated With John Daniel Clardy?

John Daniel Clardy is affiliated with the following schools: