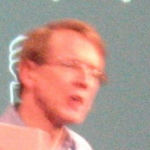 Why Is John Doerr Influential?

According to Wikipedia, L. John Doerr is an American investor and venture capitalist at Kleiner Perkins in Menlo Park, California. In February 2009, Doerr was appointed a member of the President's Economic Recovery Advisory Board to provide the President and his administration with advice and counsel in trying to fix America's economic downturn. In 2017, related to Forbes, he was recognized the 40th Richest In Tech. , Forbes ranked Doerr as the 105th richest person in the United States and the 303rd richest person in the world, with a net worth of US$ 12.7 billion as of March 3, 2021. Doerr is the author of Measure What Matters, a book about goal-setting, and Speed & Scale: An Action Plan for Solving Our Climate Crisis Now.

Other Resources About John Doerr

What Schools Are Affiliated With John Doerr?

John Doerr is affiliated with the following schools: