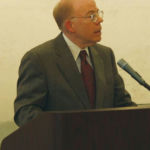 Director of the CIA

Why Is John E. McLaughlin Influential?

According to Wikipedia, John Edward McLaughlin is an American intelligence official who served as Deputy Director of Central Intelligence and briefly as acting Director of Central Intelligence. He currently serves as a Senior Fellow and Distinguished Practitioner-in-Residence at the Philip Merrill Center for Strategic Studies at the Paul H. Nitze School of Advanced International Studies of the Johns Hopkins University.

Other Resources About John E. McLaughlin

What Schools Are Affiliated With John E. McLaughlin?

John E. McLaughlin is affiliated with the following schools: