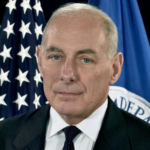 Why Is John F. Kelly Influential?

According to Wikipedia, John Francis Kelly is an American former political advisor and retired U.S. Marine Corps general who served as White House chief of staff for President Donald Trump from July 31, 2017, to January 2, 2019. He had previously served as Secretary of Homeland Security in the Trump administration and was commander of United States Southern Command. He is now a board member at Caliburn International.

Other Resources About John F. Kelly

What Schools Are Affiliated With John F. Kelly?

John F. Kelly is affiliated with the following schools: