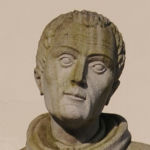 Why Is John of God Influential?

According to Wikipedia, John of God was a Portuguese soldier turned health-care worker in Spain, whose followers later formed the Brothers Hospitallers of Saint John of God, a worldwide Catholic religious institute dedicated to the care of the poor, sick, and those suffering from mental disorders. He has been canonized by the Catholic Church, and is considered one of the leading religious figures in the Iberian Peninsula.

Other Resources About John of God