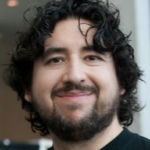 Blogger, UI designer, and the inventor of the Markdown markup language

Why Is John Gruber Influential?

According to Wikipedia, John Gruber is a technology blogger, UI designer, and one of the inventors of the Markdown markup language. History Gruber is from Philadelphia, Pennsylvania. He received his Bachelor of Science in computer science from Drexel University, then worked for Bare Bones Software and Joyent .

Other Resources About John Gruber

What Schools Are Affiliated With John Gruber?

John Gruber is affiliated with the following schools: