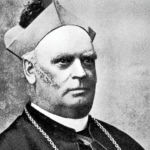 Why Is John Healy Influential?

According to Wikipedia, The Most Rev. Dr John Healy was an Irish clergyman of the Catholic Church. He served as Lord Bishop of Clonfert from 1896 to 1903 and as Lord Archbishop of Tuam from 1903 to 1918. Born on 2 January 1841 in Ballinafad, a village in the south of County Sligo in the west of Ireland, Healy was educated at Maynooth College, where he was ordained a priest in September 1867. He then served as a curate and parish priest in the Diocese of Elphin, before being offered two professorial chairs at Maynooth, those of Theology and Classics. He accepted the first and held it until 1883, when he became Prefect of Maynooth. He also edited the Irish Ecclesiastical Record in 1883.

Other Resources About John Healy

What Schools Are Affiliated With John Healy ?

John Healy is affiliated with the following schools: