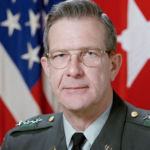 Why Is John J. Yeosock Influential?

According to Wikipedia, John John Yeosock was a United States Army lieutenant general who commanded the Third United States Army during Operation Desert Shield and Operation Desert Storm. Early life John J. Yeosock was born in Wilkes-Barre, Pennsylvania, on March 18, 1937 and grew up in Plains Township. He studied at the Valley Forge Military Academy where he graduated as valedictorian. Unable to get into West Point due to bad eyesight, Yeosock joined the Reserve Officers' Training Corps at Pennsylvania State University, graduating in 1959 with a B.S. degree in industrial engineering. He later earned an M.S. degree in operations research and systems analysis from the Naval Postgraduate School in 1969. As an infantry officer Yeosock served in the Vietnam War. During the 1980s, Yeosock was the head of an American military team sent to help modernize the Saudi Arabian National Guard.

Other Resources About John J. Yeosock

What Schools Are Affiliated With John J. Yeosock?

John J. Yeosock is affiliated with the following schools: