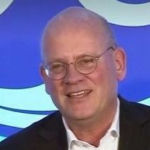 Why Is John L. Flannery Influential?

According to Wikipedia, John L. Flannery is an American business executive. He succeeded Jeff Immelt as the eleventh CEO and tenth Chairman of General Electric, serving as CEO from August 2017 until October 1, 2018. Prior to ascending to the CEO role, Flannery held leadership roles inside GE for nearly 30 years, heading GE Healthcare, GE India and other business units throughout his career.

Other Resources About John L. Flannery

What Schools Are Affiliated With John L. Flannery?

John L. Flannery is affiliated with the following schools: